During his 11 months at the helm, he has positioned Tyson Foods to better respond to shoppers who are snacking more and consuming greater amounts of protein. 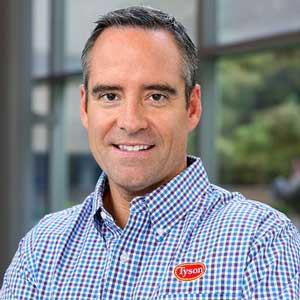 People are used to a certain way of working, and when you are trying to transform to be more setup for the future, it sort of butts up against what people have known.

The meat processor was started by John W. Tyson from the back of a truck during the Great Depression.

More than 113,000 employees in over 100 U.S. locations, and in operations across the globe

For a protein giant that has built its business around beef, pork and its iconic chicken, Tyson Foods has carved out an enviable position as the nation’s largest meat processor.

But just weeks after Tom Hayes took the helm of the company on New Year's Eve of 2016, he went about implementing the first in a series of changes to ensure Tyson Foods can better respond to a shopper who is snacking more, consuming greater levels of protein, and is interested in where their food comes from and how it’s produced.

“The leadership that I’ve hopefully brought to the team can be uncomfortable because people are used to a certain way of working, and when you are trying to transform to be more setup for the future, it sort of butts up against what people have known,” Hayes told Food Dive. “They get nostalgic about how things were in the past. They feel the future is a little scary."

Since taking over, Hayes has carefully laid the groundwork to ensure Tyson Foods doesn’t abandon its role as a major protein producer, while at the same time positioning the company for future growth.

During his 11 months on the job, Hayes has made several moves that have indelibly left his mark on the company, punctuated by the $4.2 billion purchase in April of AdvancePierre, a maker of ready-to-eat hamburgers, stuffed chicken breasts and other sandwiches. Last month, he acquired Original Philly Holdings, one of the nation’s leading producers of raw and fully-cooked Philly-style sandwich steak and cheesesteak appetizer products, for an undisclosed amount.

The deals advanced Tyson Food’s goal of expanding into branded and prepared foods that generate larger and more predictable profits than its often volatile meatpacking operations.

Hayes, who first took on the title of president last June before becoming CEO six months later, has made a clear commitment to long-term growth and transforming the company — especially “doubling down” its presence in protein. Global demand is surging, and the meat giant wants to fortify its position to be able to capitalize on this trend and grow along with it.

He also has overhauled Tyson Foods' corporate structure and company leadership roles — acknowledging that today’s dynamic food environment requires companies to be more agile and respond quickly to changes in the marketplace — and spent $84 million to double capacity at a Tennessee poultry plant while opening a 75,000-square-foot, state-of-the-art Incubation Technology Center in Arkansas. In addition, Hayes was influential in Tyson Foods’ decision to purchase a 5% stake in Beyond Meat last October, joining General Mills and the Humane Society of the United States as investors in the plant-based meat producer.

Chad Hart, an Iowa State University agricultural economist, said Hayes is succeeding in repositioning Tyson Foods as a protein company that focuses on meat and poultry, its primary areas of strength, but also plants and snack-based products that are in greater demand with consumers. He said these efforts should be instrumental in getting more shoppers to recognize there is more to Tyson Foods, founded during the Great Depression, than just its packages of chicken most people see at the grocery store.

"You got to give him a pretty good grade as far as what he is doing. He's trying to move a company that has a well-established brand in one area, and he's trying to figure out how do we play off that and build on it and extend it," Hart told Food Dive. "It could be hard for him to extend the Tyson brand because of the deep link with chicken, but the moves that he is making should be doing that, and arguably in the long run, will."

We want to certainly be able to have the right cost structure, but the future will be really focusing on growing our brands, our customer brands, and being that company that people look to and say, 'They are an ongoing, growing food company.

Some moves, however, have been less uplifting. Hayes announced in September that Tyson Foods would cut 450 jobs, mostly corporate positions, but that these “hard decisions” would create a more nimble, responsive company that can better respond to its customers and consumers.

“We want to certainly be able to have the right cost structure, but the future will be really focusing on growing our brands, our customer brands, and being that company that people look to and say, 'They are an ongoing, growing food company,' ” he told Food Dive.

During the interview, Hayes was quick to deflect the success of Tyson Foods under his watch — the company’s stock is up about 30% since he took over as CEO — to the company’s employees, who are responsible for carrying out his vision.

“We continue to bring in new team members, as well as promote those that have been with the company for a while. They’ve really done an amazing job going through all the transformation,” he said. “It’s a lot when you acquire a company like AdvancePierre and you ask them to do that on top of going through all the tightening we’re doing. They are asked to carry a huge load.”

As shoppers increase their protein consumption, companies such as Tyson Foods are ideally positioned for the future as long this remains an essential part of the consumer's eating habits. The meat and poultry giant is expected to continue expanding its own protein business and look for acquisitions outside the company that give it a deeper foothold in the snacking and portable food space.

View all | Post a press release
Glow expands into US market with ESG focused consumer insights product
From Glow
The One Step Closer to Zero Waste Campaign and first-ever OSC Packaging Innovation Award
From One Step Closer Packaging Collaborative
Final Foods Launches Plant-Based Meat for Gourmet Chefs
From Final Foods, Inc.
Kindness - a plant based food startup looks to expand the market for alternative proteins
From Kindness
Editors' picks
Latest in Manufacturing
Industry Dive is an Informa business
© 2023 Industry Dive. All rights reserved. | View our other publications | Privacy policy | Terms of use | Take down policy.
Cookie Preferences / Do Not Sell