Business immigration insider briefing: How to stay compliant under the Trump administration

With White House uncertainty and potential changes looming, Shin-I Lowe and Jennifer Robinson with Littler Mendelson look at existing laws and ways for businesses to respond.

Shin-I Lowe is a shareholder in the global mobility and immigration practice for Littler Mendelson in Miami. Jennifer Robinson is the office managing shareholder in Littler’s Nashville branch and co-chair of the Food and Beverage Industry Group.

With the contentious elections last November 2016 behind us, employers now need to face the reality of a new administration and how it intends to fulfill some of its campaign promises to the American people. This article will provide employers with an objective assessment of the latest developments as it concerns the administration’s approach to the topic of immigration that will help employers stay compliant while they manage their business and their employees. We will provide a summary of the pertinent laws and key enforcement actions that affect the agriculture and food sector and how potential new regulations in the pipeline may affect the way employers conduct and manage their businesses.

Generally, changes to U.S. immigration laws will come from the Department of Homeland Security (DHS), Department of State, Department of Labor (DOL), as well as the president’s executive orders. Since Nov. 6, 1986, it is illegal for an employer to knowingly hire and continue to employ unauthorized workers, and employers are required to complete Form I-9 to verify the identity and employment eligibility of all individuals hired in the United States after that date.

The Handbook for Employers, Guidance for Completing Form I-9 is an excellent resource. Employers are required to maintain for inspection original Forms I-9 for all current employees, and for former employees, retention of Forms I-9 are required for a period of at least three years from the date of hire or for one year after the employee is no longer employed, whichever is longer. Noncompliance can result in criminal and civil sanctions for employers.

With the current administration’s focus on curbing illegal immigration, we expect that worksite enforcement and government audits will increase. One type of worksite enforcement is the I-9 Inspection, illustrated below. Civil fines for I-9 paperwork violations result in a penalty ranging from $216 to $2,156 for each Form I-9, document abuse/discrimination violations can result in a fine ranging from of $178 to $1,782, and the fine for employing an alien unauthorized to work can range from $589 to $21,563. The penalty assessed will depend on business size, history of violations, good faith, seriousness of violation, and number of unauthorized workers. Criminal sanctions are likely after a first violation, which could mean jail time for employer violators. 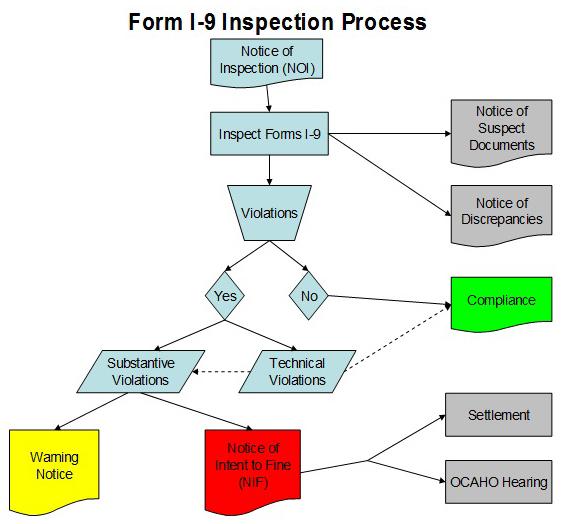 In 2013, DHS conducted more than 3,000 companies were audited and 179 employers were arrested, while in 2015, there were 181 workplace audits and charges were brought against just 27 employers. DHS states that re-audits typically occur within 18 to 24 months after original audits if an employer was warned.

Another type of worksite enforcement that has probably received the most press coverage as of late is worksite raids, which affects not only employers but also employees and moral in the workplace. A raid is targeted enforcement and can occur both at the home or at the workplace of criminal aliens and other individuals who are in violation of U.S. immigration laws. ICE conducts these kinds of targeted enforcement operations regularly and has done so for many years.

In early February 2017, within a period of five days, more than 680 people were arrested in a series of raids. In all, approximately 75 percent were criminal aliens. The reason the recent wave of raids has caused much panic in the food industry, in particular, as well as in the immigrant community is because of the sector’s heavy reliance on immigrant labor, many undocumented. For example, in California, the potential impact of workplace raids is enormous. According to the National Restaurant Association, out of the country’s 12 million restaurant workers, 9 percent are undocumented, while the Restaurant Opportunities Center estimates that in large cities they make up almost half of that industry’s workforce.

While officials conducted similar raids during Obama’s presidency, they prioritized immigrants who were deemed a threat to national security or public safety as opposed to those convicted of a felony that was not considered a priority previously, such as obtaining and using a fake social security number or having an old DUI.  Still, more than 2 million people were deported under Obama, leading some critics to label him “deporter-in-chief.”

DHS indicates that investigations are based on leads and tips obtained from a variety of sources, such as court records, anonymous tips or complaints to government agencies for wage and hour violations, identity and benefit theft, human trafficking, alien smuggling, document fraud, and suspicion that an individual is illegally present in the U.S.  DHS also indicates that it prioritizes investigations involving critical infrastructure and key resources (those linked to public safety and/or national security), and those employers that violate employment laws, and protect employment opportunities for the lawful workforce. There are 18 principal critical infrastructure sectors, one of which is Agriculture and Food.

Finally, another topic of growing concern is E-Verify. E-Verify is an electronic program through which employers verify the employment eligibility of new hires.  Please note that enrollment in E-Verify does not exempt an employer from properly completing Form I-9. Currently, E-Verify is voluntary for most employers (public or private), but mandatory for some in certain states: Arizona and Mississippi require all employers to use E-Verify; seven states require public contractors to use E-Verify: Colorado, Georgia, Missouri, Nebraska, Oklahoma, Rhode Island, and Utah; and several states require their state agencies to participate in E-Verify: Colorado, Georgia, Idaho, Minnesota, Missouri, Nebraska, North Carolina, Oklahoma, Rhode Island, and Utah.

Many employers doing business in states where E-Verify is not mandatory still opt to participate in the program because they want an additional safeguard to ensure that their new hires are in fact authorized to work in the United States and avoid potential penalties in the event their new hires’ documents were not properly reviewed during the I-9 process, in which case, E-Verify would prompt an employer to carefully review the I-9 documents.

This is E-Verify now.  What can we expect with the new administration?

On January 23, 2017, a draft Executive Order entitled “Protecting American Jobs and Workers by Strengthening the Integrity of Foreign Worker Visa Programs,” was leaked. Although this executive order has not been signed, it gives us a glimpse of what could be when and if it is.  If signed, all employers should be prepared to enroll and participate in E-Verify, which, in a high turnover industry such as agriculture and food, it would mean that many employees run through the system would raise a red flag.

Employers will be faced with difficulties in staffing their workforce in an industry that has traditionally not been attractive to U.S. workers for a variety of reasons, having to make the difficult decision to terminate a valued employee, or face the possibility of fines and even jail time for violating the law. In the meantime, the FY 2018 President’s budget proposal includes the expansion of E-Verify as a means to expand worksite enforcement strategies in order to reduce demand for illegal employment. The ultimate goal is to support the mandatory use of E-Verify nationwide within three years.

In conclusion, below is a list of the types of investigations and audits that can be conducted by the government and the steps employers should take to stay compliant. Employers in the agriculture and food sector should pay particular attention to the first two: