3 strange and gross threats to the citrus industry

As California's citrus growers have struggled in recent days to save their crops from bone-chilling cold, it's served as a reminder of how fragile citrus is. Few other crops seem as vulnerable to the ravages of nature. Certainly no other crops are at risk of global annihilation from a really nasty looking bug.

Here's a look at some of the strange and gross threats that an orange faces before it makes its way to consumers' table. 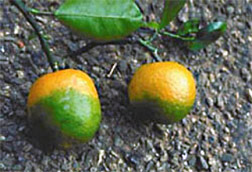 By far the biggest threat to citrus is the global epidemic called "citrus greening." The disease has been around for about a century — first reported in China, where it was called "yellow dragon disease." About 10 years ago, the disease suddenly reached a seemingly unstoppable level. Millions of acres of citrus trees around the world were infected.

There's no known cure for citrus greening. When a tree gets it, it's doomed, although it will take about five years before the tree finally succumbs.

Citrus greening is spread by a repulsive looking insect called the Asian citrus psyllid. The bugs were first spotted in the U.S. just a few years ago, first in Florida, then in California. By now, infected trees have been found across the country. Some 200,000 acres of citrus trees have already been lost.

The industry has spent millions of dollars trying to find and kill the insects and to quarantine trees. But food activists in particular are worried about the cost of that battle. Because killing the bugs requires the use of pesticides. And the only long-term solution, if it can even be found in time, is to genetically modify the crop.

The latest news from researchers and the USDA is that while citrus greening has spread to Texas, Louisiana, Georgia and South Carolina, the latest GMO research looks promising. 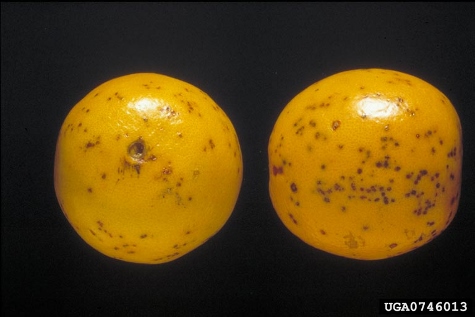 The fungal disease called "Black Spot" does exactly what you'd expect it to do, given its name. The disease covers citrus fruit with a black, spotted fungus that renders the food unusable. The disease has been found in parts of Florida and California.

The truly nasty thing about Black Spot is that, like citrus greening, it's incurable — and the global fruit industry lives in terror of the fungus. As a result, places that are black-spot free, like the European Union, tend to ban all fruit shipments from places where the disease is detected. Just last month, the EU did exactly that to South Africa, bringing panic to that nation's $1.3 billion export business. 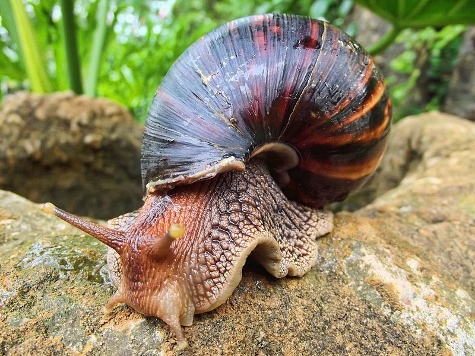 So, this is what you need to know. There's this thing. It's a snail. And it's from Africa, But it's not what you think of when you think of snails. It's enormous — like science-fiction-level enormous. They get as big as footballs, leaving slimy trails behind them wherever they go.

The massive snails have been found in Hawaii and Florida. And the threats they pose are extraordinary.

First, the ugly creatures are prolific. A female can lay 1,200 eggs a year!

Second, they carry a parasite that can spread meningitis to humans.

Third, they eat like crazy. They'll eat almost anything — including plaster and stucco — and have been known to do serious damage to homes. But the true threat from their hunger is to agriculture in the areas of the country where the snails can survive — those warm and sunny paces like Florida, Hawaii and California where citrus grows.

And therein lies the problem. The environments where citrus thrives tend to be those where all sorts of nastier forms of life also thrive.

Whether it's Australian gall wasps, bacterial citrus canker, banana mealybugs, crop-killing cold or any of the three major threats discussed earlier, citrus seems to attract the wrath of Mother Nature.

Would you like to see more retail news like this in your inbox on a daily basis? Subscribe to our Food Dive email newsletter! You may also want to read Food Dive's look at the food mergers and acquisitions that will shape 2014.