The women-owned frozen treat brand is targeting a certain member of Britain's royal family with its International Women's Day launch, and Scramblers puts a healthy breakfast in a bar.

Royal ice cream for everyone

To promote the flavor, Coolhaus is sending pints of Queens' Coffee to a number of inspiring women and is also “reaching out to one very well-known ‘Queen’ — or Duchess, perhaps — to champion women being bold on both sides of the pond.” The billboard references Markle and her husband, Britain's Prince Harry, announcing earlier this year they were dropping their royal duties and moving to North America.

The company even marketed the new product on 13 billboards around Los Angeles — where the former royals have just moved — with the message “Ice cream fit for a queen. Call us, Meghan.”

Coolhaus is a women-owned brand from California known for its unique flavors such as Milkshake & Fries, Midnight Munchies and Buttered French Toast. Coolhaus said it selected Allegro's Three Queens Blend coffee to create the new flavor because the coffee beans are fully sourced and produced by women in East Africa.

This isn’t the first partnership Coolhaus has made to celebrate a holiday. Last year for National Mustard Day, French’s teamed with the brand to release a mustard-flavored ice cream.

More companies are doing limited-edition promotions and partnerships to drum up consumer interest, especially in the ice cream category. In the last year, Tipsy Scoop also partnered with Angry Orchard and Ample Hills Creamery teamed up with The New York Times for product launches.

Retailers say premium ice cream is most popular with their consumers, according to the International Dairy Foods Association, so shoppers might be interested in this high-end coffee variety. Although there are already a lot of coffee ice creams on the market, introducing a premium flavor with a message about promoting women could royally help it rise above the competition.

Brunch beverage in a can

As the weather gets warmer and spring blossoms begin to open, it’s also becoming the season when people want to get outside and enjoy a leisurely brunch.

Golden Road Brewing has created a beverage to accompany that brunch, perfect for those who don’t want to make a full pitcher of mimosas or are searching for a more portable option. The California brewery’s Champango is a mimosa-inspired canned blend of its Mango Cart Wheat Ale. It has a 6.5% ABV and is sold in skinny 12-ounce cans.

“Over a lively discussion at a Golden Road beer dinner, a fellow beer industry friend asked why we hadn’t developed our Mango Cart Champagne drink from our brewpubs into a package for folks to take home,” Golden Road President and Founder Meg Gill said in an emailed statement. “The aha moment turned into an innovation obsession: how can we create a product that tastes as good — if not better than — the tasty treat we serve at our pubs? Our brewing team worked tirelessly to create a beer-based liquid with all the bubbly, flavorful, champagne characteristics of a true champagne Mango Cart mimosa.”

The AB InBev-owned craft brewery has been at the forefront of innovation for the world’s largest brewer. It operates five craft brewpubs in California. It recently collaborated with Drinkworks — a partnership between AB InBev and Keurig Dr Pepper — to produce versions of some of its popular brews that can be freshly made at home using a countertop machine. And a nonalcoholic version of its Mango Cart Wheat Ale with a less than 0.5% ABV hit shelves this year.

While beer and champagne cocktails are popular in bars, there are few products that mix the two in a can. Some breweries have created champagne-inspired beers (and no, we’re not talking about Miller High Life), while other craft breweries have devised sour beers inspired by the orange juice and champagne mix of mimosas.

Golden Road’s new combo brings a lot of the flavor of the brunch favorite easily. Some bartenders name Mango Cart Wheat Ale as a favorite cocktail mixer on its own. The new blend is also lower in alcohol than a typical mimosa, appealing to those who want the taste of the cocktail without the intoxication. And with beer becoming an acceptable breakfast beverage, this drink may appear at many brunches as the seasons change.

As on-the-go shoppers change how they consume breakfast — or abandon it altogether — makers of foods commonly associated with morning are cracking open a different way of thinking about the meal.

Deliciously Different has rolled out a portable bar that combines the convenience of the popular protein bar with the nutritional attributes people love about eggs. The product is Scramblers: The Original Omelet Bar. On its website, the company touts the product as a way to avoid “cold, messy yogurt” and the scores of “sweet” energy bars currently crowding store shelves.

“Morning time is a notoriously chaotic and frenzied daypart,” Matt Tolnick, CEO of Deliciously Different, told Food Business News. “For those who have the good sense to eat ‘the most important meal of the day,’ many settle for quick eats which aren’t healthy or healthy eats which aren’t always convenient.  Our vision was to deliver superior nutrition and superior convenience.”

Scramblers: The Omelet Bar is made with free-range, organic, certified humane eggs made by Pete and Gerry’s Organics. It also contains grass-fed butter and all-natural Wisconsin cheese. The Omelet Bar comes in three varieties — ham and cheddar; spinach and feta; and chicken chorizo. It keeps for up to 12 months without refrigeration or chemical preservatives. ​

The product is touted as a healthy, delicious, portable egg snack that doesn't require heating or refrigeration. Its portability works with everyone from someone who is traveling, dieting, working out, has children or is just on the go, Deliciously Different said. Scramblers: The Original Omelet Bar ticks off requirements for a host of other trends popular with consumers. It’s gluten free, keto friendly, has no artificial flavors and is loaded with 9 grams of protein.

As busy lives get busier, the first meal consumers drop appears to be breakfast. A study in 2017 by Technomic found more consumers are skipping breakfast compared to two years earlier, according to a press release.

It’s no wonder that food companies such as Kellogg, General Mills and Hershey have increased their presence in the bar space through acquisitions or internal innovation. In the case of General Mills and Kellogg, the cereal giants also have rolled out bar versions of their breakfast classics such as Cocoa Puffs and Frosted Flakes.

And while not a bar, even Kraft Heinz entered the breakfast segment two years ago with Just Crack an Egg. This cup loaded with diced vegetables, meat, cheese and potatoes is sold in the refrigerated section next to the eggs — the only ingredient that needs to be added to the product before it’s microwaved.

As consumers become more active and snacking gets more popular, manufactures of commodities like eggs and cereal will continue to look for new and creative ways to get their products into the hands of shoppers.

Correction: A previous version of this story incorrectly stated the amount of champagne in Champango. 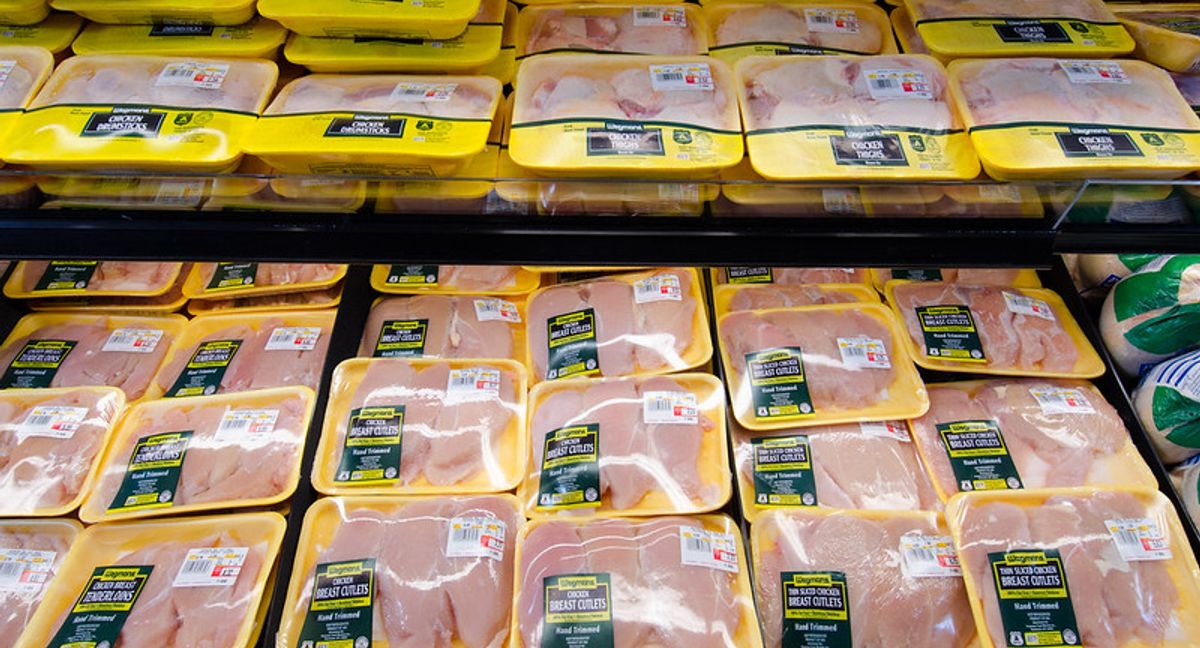